Although many sisters passed by Australia en route to Tahiti, Rarotonga and Fiji since 1848, it was not until 1904 that the Sisters made a community in Australia. In 1903, the French Government passed Laicisation Laws, which enforced the closing of the novitiate in New Caledonia. The sisters came to Ballarat, and stayed with the Sisters of Mercy while obtaining Victorian teaching registration.

In 1904 a group went to Gormanstoun in Tasmania, where they taught for a year, and then went to Port Fairy on the west coast in Victoria, where they were in the primary school. In the meanwhile, a novitiate was set up in Ballarat, where three young New Caledonian women of French descent were received into the Congregation. Much to the disappointment of their students, the sisters withdrew from Port Fairy and Ballarat in 1913.

In the aftermath of World War II, the nutrition needs of the seminarians at the provincial seminary at Corpus Christi College, Werribee, Victoria, were a cause of concern for the Bishops. At the request of Archbishop Mannix, six sisters were appointed to Werribee, where they ministered as infirmarians, caterers and seamstresses, until the transfer of the seminary to Glen Waverley and Clayton. 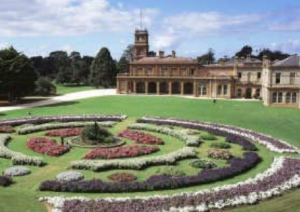 As the years progressed, a stand-alone aged care facility for 40 residents was not viable, and the residents were rehoused at Corpus Christi Aged Care Facility, at Clayton in 2006. This institution is run by a professional Catholic Organisation and its beginnings were facilitated by our donation of 40 bed licences. The Archdiocese suggested the former seminary as a site. It includes 130 Aged care beds, and 53 Independent living units for retired persons. So our inability to continue, flourished into a much larger Catholic Aged Care and work opportunities for a large multi -cultural staff.

For ten years the sisters lived in a convent abutting the Aged Care Facility, but with time it was too large for our needs. The convent was purchased by VMCH, and it was converted to Cluny Memory Support House, and was refurbished to suit a Montessori based model of care. The sisters who vacated the large house moved into the adjoining Retirement Village.

During the late sixties the seminary at Werribee was bursting at the seams, the senior seminarians were moved to Glen Waverley, a purpose built building designed by Cyril Kelly. The sisters were appointed to minister to the seminarians. With time the numbers decreased, and the seminarians and sisters were relocated to Clayton in 1973. They remained there until 1992, and retired to live at Dromana, where they assisted in the parish until 2003.

In 1977, three sisters formed a community in a parish house close to St John’s Church, East Melbourne, where the sisters were involved in parish ministry, education and nursing. The sisters relocated to Abbotsford with the re-opening of the Formation House, and then to Glen Iris. In 1997 the community transferred to East Brunswick. In 2016 the Region Secretariat was relocated here from Seaford.

Responding to the request of the vicar-general of the Darwin Diocese, Sr Gwen Daw was missioned to take charge of the Santa Teresa clinic in 1991 . The following year the community was established, and the sisters have worked in the Clinic, in the Women’s Centre, in the Parish and in the School. Spiritual direction and retreat direction were also part of the ministry. Second year novices were welcomed in the community for six months community experience in a cross – cultural setting. We relinquished this apostolate in 2009.

In 2013 a community was formed at Seaford to house the Region Administration. During this time Sr Valerie facilitated Art Therapy sessions at the local Neighbourhood House. Sr Gwen had a part time ministry with the Family Care Sisters’ centre offering rest and care for women. This community was closed in 2019

Following on from the recommendations of the Second Vatican Council, the late Cardinal Knox instigated Melbourne Overseas Mission, an outreach of the Melbourne Archdiocese in Papua-New Guinea and in South America.

The Cardinal requested that Cluny Sisters join the Melbourne team at Kanabea in the mountains of the Gulf Province in Papua-New Guinea, and a community was established there in 1971. The sisters have been involved in the school, in the clinic, in Distance Education, in catechetics, women’s groups and youth groups, and general mission management.

Sisters were later requested to staff the High School at Bema, another Melbourne outpost, and in 1996 Cluny Sisters took up the challenge. Distance Education for school leavers, preschool activities, and a sewing project have been included in the sisters’ ministries.

Meanwhile the Salesian Senior College at Araimiri was without women to supervise the girls in the Boarding School. In 2007 a Cluny community was commenced there, with sisters teaching in the school and working in the parish.  This came to an end in 2011 when the need for sisters to establish a house in Port Moresby necessitated the closing of the Araimiri community.

In 2011 the community at Boroko was established, with accommodation for student sisters and secretariat. (See Our Communities  for current ministries.)